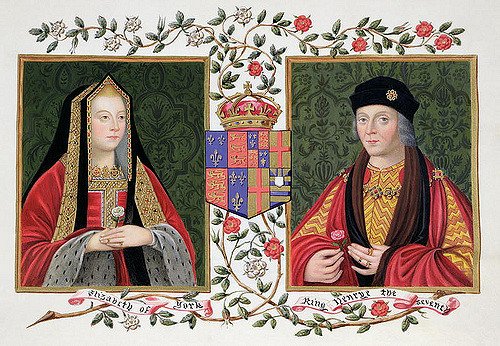 Henry VIII
In 1501, Arthur was inducted into his half-sister, Elizabeth of York’s household. He was appointed as Elizabeth’s cupbearer, a highly trusted and intimate position in court. Following the death Queen Elizabeth in 1503, Arthur was incorporated into the joint households of Henry VII and the young prince Harry. Drawing the highest pay in the household, £6 13s 4d, ‘Master Arthur’s’ prominent position offered a familiar and reassuring presence for the King and Arthur’s beloved nephew.[1]  This also provided Henry, the young Duke of York, a companion and role model. Henry VIII later fondly recollected his uncle to be, ‘the gentlest heart living.’[2]  Arthur, unlike other Yorkists had ‘the inestimable advantage of bastardy’, and was removed from the medieval game of thrones.[3]  Moreover, during King Henry VII’s serious illness following the death of this wife Elizabeth, Arthur was a trusted and reassuring presence during a period of dynastic uncertainty, when it was imperative word of the kings condition did not reach the challengers to the Tudor dynasty.[4]
Arthur was summoned by Henry VII to serve at the fore during the Lambert Simnel plot.[5]  In 1487, Lambert Simnel, the Pretender,  impersonated Edward, the Earl of Warwick, and launched an invasion in support of his claim to the throne. Henry VII had the real the Earl of Warwick in the custody of the tower and brought him out to display him to the people. Despite this Simnel still threatened to destabilise Henry’s newly established reign and accord with Yorkist supporters.
Arthur retained his place at court following his nephew Henry VIII’s succession. In 1511 he married Elizabeth Grey, the widow of the ‘treasonous’ Edmund Dudley, who was executed by the King’s command. Arthur became a Gentleman of the Privy Chamber and in 1513, was made a Spear of Honour. He was a favourite at court and would often be given various ceremonial and diplomatic responsibilities. Arthur was awarded a knighthood by Henry VIII in October 1513.[6]  Following the Treaty of Mechlin, Henry VIII exuberantly launched his campaign to claim territory back in France. The Treaty of Mechlin (1513), was an agreement between Henry VIII, Maximilian I, Holy Roman Emperor, Ferdinand II of Aragon and Pope Leo X to form an alliance against France.[7] Arthur held a command in Henry’s naval forces and was Captain of the ship, The Trinyte Sovereigne, during Henry VIII’s 1514 campaign in France, receiving 18d. a day in wages.[8]  Twenty-eight ships launched from Plymouth, battling severe weather they arrived off the coast of Brest.